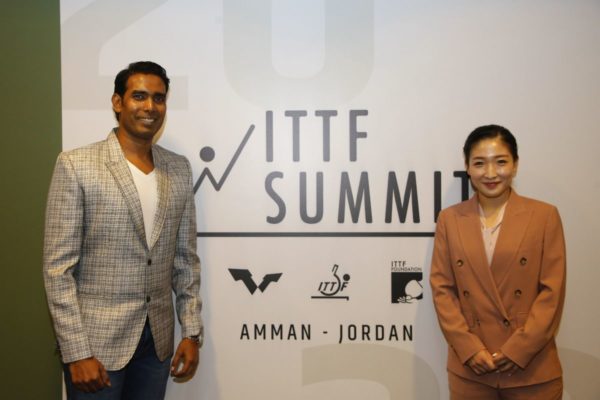 Everything is in place at the International Table Tennis Federation (ITTF). The body chaired by Petra Sörling of Sweden has been holding its annual summit in Amman, Jordan, since Sunday 4 December. The first one to be held in person for two years. Before that, it held elections for its Athletes’ Commission. For the first time since its creation, the commission will have two presidents – a woman and a man: Sharath Kamal Achanta from India and Liu Shiwen from China (photo above, from left to right). Sharath Kamal Achanta, 40, is the first Indian table tennis player to win nine senior national titles. He was the singles gold medallist at the 2006 Commonwealth Games in Melbourne in 2006. Liu Shiwen, 31, won the team gold medal at the Rio 2016 Games, before being silver medallist in mixed doubles at the Tokyo 2020 Games. She was world singles champion in Budapest in 2019. As chairmen of the Athletes’ Commission, Sharath Kamal Achanta and Liu Shiwen will join the ITTF Executive Board. They join South Korea’s Ryu Seung-Min – First Vice President of the IOC Athletes’ Commission – to represent the voice of table tennis. The ITTF Athletes’ Commission is also composed of Stefan Fegerl and Elizabeta Samara, the two vice-presidents, Omar Assar, Ingela Lundback, Jon Persson, Daniely Rios, Melissa Tapper and Kelly Van Zon.