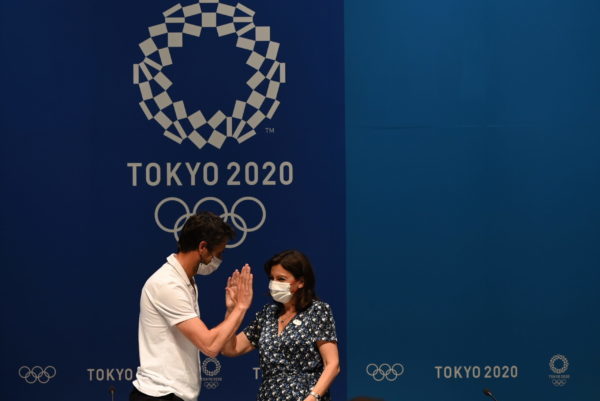 D – 2 for Paris 2024. On Sunday, August 8th, the Paris 2024 Games organisers will receive the Olympic flag during the closing ceremony of the Tokyo Games. A ten-minute sequence is reserved for them during the evening. With two and a half days to go before the event, Tony Estanguet, the president of the OCOG, and Anne Hidalgo, the mayor of Paris, broadly unveiled it during a press conference on Friday, August 6th. As announced earlier by FrancsJeux, the show part of the Paris sequence will not take place at the Olympic Stadium in Tokyo, but on the Place du Trocadéro in Paris. It will be filmed and broadcast live on the giant screens of the Japanese venue. The music was composed by the artist Woodkid. The French organisers have announced a cast full of surprises, with the presence of some of the medallists from the Tokyo Games who have already returned to Paris. Their names have not been revealed, but Tony Estanguet and Anne Hidalgo have hinted that the star of the show will be a giant flag, the size of a football pitch, which will be deployed on top of the Eiffel Tower. “The biggest flag in the world,” said the OCOG president, without specifying whether it would be marked with the Olympic rings, the Paris 2024 logo or the three colours of the national flag. “Our ambition, with this sequence at the closing ceremony of the Tokyo Games, is to invite the whole world to the heart of what the Paris 2024 Games will be”, explained Tony Estanguet. The protocol part of the ceremony will be more traditional: Yuriko Koike, the governor of Tokyo, will hand over the Olympic flag to Thomas Bach, who will then hand it over to Anne Hidalgo. The mayor of Paris explained that the flag with the five rings will then be deployed in Seine-Saint-Denis, before being taken on a tour of France and displayed at the Paris City Hall. “We are not going to let it sleep in a closet,” she promised.