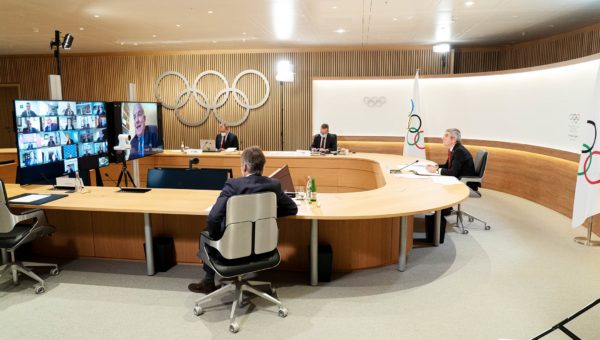 The casting was prestigious, but the result is nothing very spectacular. Meeting on Saturday 12 December in virtual mode, with Thomas Bach in Lausanne as master of ceremonies (photo above), the 9th IOC Olympic Summit covered the topics on the agenda without trying to reinvent history. The final declaration swings between confidence and satisfaction, especially on preparations for the Tokyo Games next year and Beijing 2022. One theme, however, is slightly off the road in a straight line: doping. Without citing him by name, the IOC is concerned about the adoption by the United States of the Rodchenkov Act, a law signed at the beginning of the month by Donald Trump, which authorises the American justice system to prosecute and sanction anyone involved in a case of international doping, including outside its borders. “Global cooperation between sport and governments must be strengthened under the auspices of WADA”, the IOC wrote in its Olympic Summit report. “The global system, which includes WADA, the Court of Arbitration for Sport (CAS), governments around the world and International Federations (IFs), with the full participation of athletes, must not be jeopardised by unilateral actions by governments or individual sports organisations. The Summit reaffirmed that the fight against doping in sport can only be credible and successful if it is based on a system of globally accepted rules and on unfailing international cooperation”. Clearly, there is no question of letting a country seek to impose itself as the gendarme of the fight against doping, in defiance of the rules in force in the Olympic movement. The United States was not mentioned by Kirsty Coventry, the president of the IOC Athletes’ Commission, invited to present an overview of the consultation launched with Olympians around the world on rule 50 of the Olympic Charter. “We have received feedback from athletes from many other NOCs, such as Australia, Canada, Ireland, Germany, Mexico and Nigeria, to name a few. Many others have also expressed their views through quantitative regional surveys or qualitative consultations”, said the former swimmer. Not a word about the United States, which the Olympic and Paralympic Committee (USOC) announced last weekend that it would not sanction its athletes if they took the urge to protest at the Tokyo Games, and violate this rule 50 of the Olympic Charter.