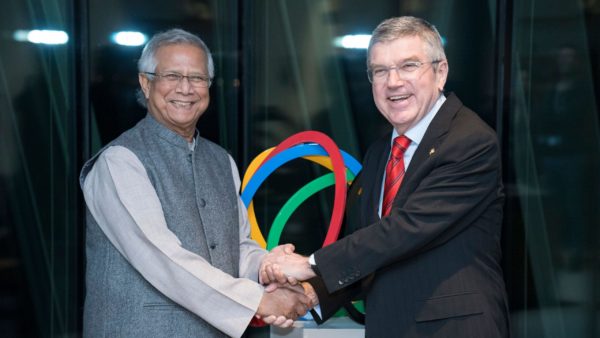 After Kip Keino at the Rio 2016 Games, the IOC will award its Olympic Laurels for the second time to an international personality at the opening ceremony of the Tokyo Games. But, this time, the laureate cannot boast of any sporting past. The Olympic body has chosen social entrepreneur, economist, civil society actor and Nobel Peace Prize winner, Muhammad Yunus from Bangladesh. The Olympic Laurels were created by the IOC to distinguish leading personalities for their outstanding contribution in the fields of education, culture, development and peace through sport. Professor Muhammad Yunus is the founder of the Yunus Sports Hub, a global network of social enterprises providing solutions through sport. He has collaborated with the IOC on several projects, including the Young Leaders Program, the “Imagine” Youth Peace Camp and the Athlete365 Business Accelerator. He was selected by a jury representing five continents: Japanese director Naomi Kawase for Asia; scientist and former Canadian Governor General Julie Payette for the Americas; South Africa’s Phumzile Mlambo-Ngcuka, executive director of UN Women, for Africa; Dame Meg Taylor, secretary general of the Pacific Islands Forum Secretariat and politician from Papua New Guinea for Oceania; Jacques Rogge, honorary president of the IOC, for Europe; and Thomas Bach as jury chairman. The first Olympic Laurels in history had been awarded to Kenyan Kip Keino on August 5th, 2016, during the opening ceremony of the Rio Games.