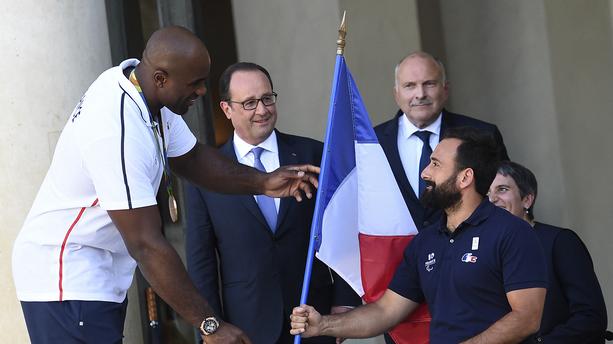 After Teddy Riner and Michaël Jérémiasz at the Rio 2016 Games (photo above), which French athletes will carry the flag of the delegation at the opening ceremony of the Tokyo Games? The answer will be known at the beginning of July. But the virtual ceremony marking D-100 days before the start of the Games gave the French national Olympic and Paralympic committees the opportunity to unveil the list of candidates. They are nineteen, that is to say twelve for the Olympic Games and seven for the Paralympic version. For the first time, it will be possible – and even recommended by the IOC – to choose two flag bearers, a man and a woman. On the Olympic side, the candidates are Clarisse Agbegnenou (judo), Johanne Defay (surf), Sandrine Gruda (basketball), Maïva Hamadouche (boxing), Kristina Mladenovic (tennis), Mélina Robert-Michon (athletics) and Charline Picon (sailing) for the women ; Samir Ait-Saïd (gymnastics), Maxime Beaumont (canoeing), Renaud Lavillenie (athletics), Florent Manaudou (swimming) and Astier Nicolas (horse riding) for men. The two elected will be appointed by athlete ambassadors from each Olympic federation, via a points system. On the paralympic side, where the flag bearers will be chosen in June by the public, the decision will be played between Perle Bouge (rowing), Pierre Fairbank (athletics), Souhad Ghazouani (weightlifting), Stéphane Houdet (tennis), Nantenin Keita ( athletics), Sandrine Martinet (judo) and David Smetanine (swimming).