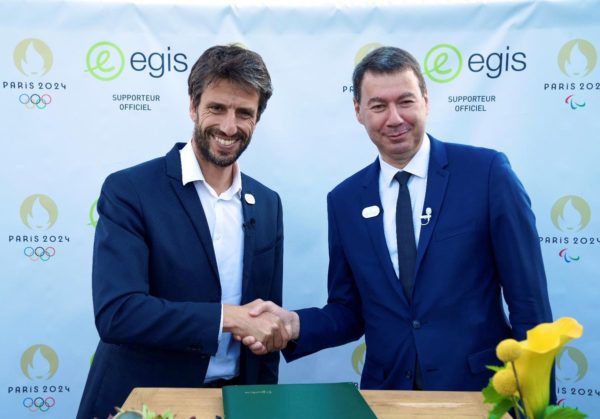 One more. On Tuesday 21 June, the Paris 2024 OCOG added a new line to its list of partners. The latest addition is the engineering company Egis, which was already involved in the bidding process. It joins the marketing programme of the Paris 2024 Games as an official supporter, the third rank. The contract was officially signed on the roof of a hotel in the 16th arrondissement by Tony Estanguet, the president of Paris 2024, and Laurent Germain, the CEO of Egis. It provides for a cash component and a service component. The French company, whose headquarters are located not far from the Vélodrome national in Saint-Quentin-en-Yvelines, has already begun to accompany the Paris 2024 teams, notably on the ventilation of the Paris La Défense Arena, where the swimming races and the water polo finals will take place. With this new entry, the OCOG now has 19 partners for the three levels of its marketing programme. A twentieth partner will be officially announced on Wednesday 22 June. It will be the first new premium partner since the arrival of the pharmaceutical group Sanofi last July. The Paris organisers aim to reach at least 80% of the marketing revenue by the end of 2022, out of a hoped-for amount of €1.1 billion. According to the OCOG, this target should be reached. The organising committee explains that it is on a par with the London 2012 Games in terms of the number of partners, but that it is above 30% in terms of the value of contracts.