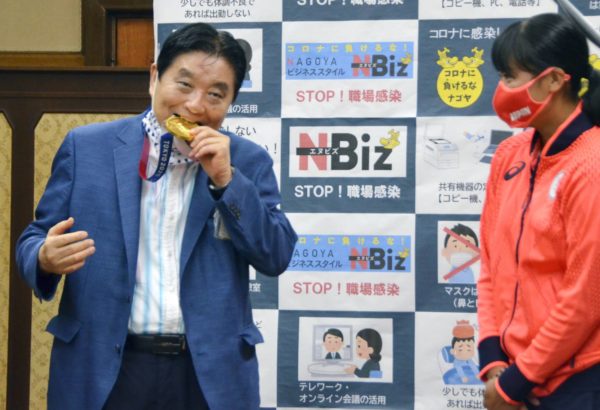 The story of Nagoya’s mayor and the gold medal he bit off continues in Japan. Takashi Kawamura, who has been criticized for biting the Olympic gold medal of one of his constituents, softball player Miu Goto, held a mea culpa press conference on Monday, August 16th. Surprisingly, he announced his decision to forgo three months of his mayoral salary, worth 1.5 million yen ($13,000). He again apologised for the incident. “I feel morally responsible,” Kawamura said, adding that he would present a resolution to the city council to reduce his salary as soon as possible. “I disgraced this celebration, I offended Miu Goto and the Japanese people”. But the mayor of Nagoya ruled out resigning, saying he wanted to “continue serving the citizens” of his city. Nagoya authorities have received more than 7,000 complaints about Takashi Kawamura’s behaviour towards Miu Goto.