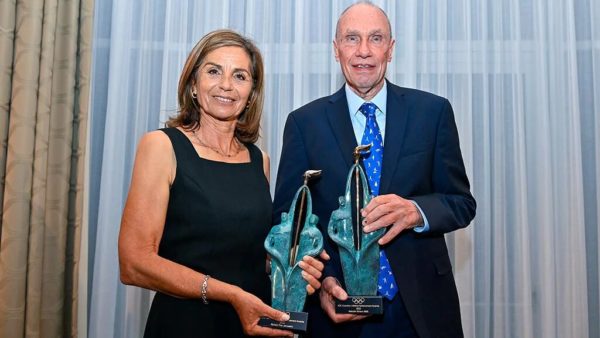 Prestigious award for Myriam Fox-Jérusalmi (photo above, left). The Franco-Australian, bronze medallist for France in slalom canoeing at the Atlanta Games in 1996, has been distinguished by the IOC. She received, together with the British Malcolm Brown (on the right in the photo), the trophy for exceptional coaches. Myriam Fox-Jérusalmi moved to Australia before the Sydney 2000 Games, after her athletic career ended, and helped her athletes win twelve world titles and four Olympic medals in her speciality, slalom canoeing. In particular, she trained and coached her daughter, Jessica Fox, who has already gone down in history as the greatest single-seater slalom canoeist of all time, with nine world titles, a silver medal, two bronze medals and an Olympic gold medal, as well as a gold medal at the 2010 Singapore Youth Games. Also honoured by the IOC, Britain’s Malcolm Brown was recognised for his career as a triathlon coach. A physical education teacher by training, he initially coached on a voluntary basis before turning professional, first in athletics and then in triathlon. A former head coach responsible for endurance events at the British Athletics Federation, Malcolm Brown notably accompanied the Brownlee brothers, Alistair and Jonathan, multiple Olympic medalists, to the highest level. Since 2017, the winners of the Outstanding Coach Awards have been selected by a committee appointed by IOC President Thomas Bach. It is composed of Sergey Bubka, Daina Gudzineviciute, David Haggerty, Emma Terho and Hong Zhang.