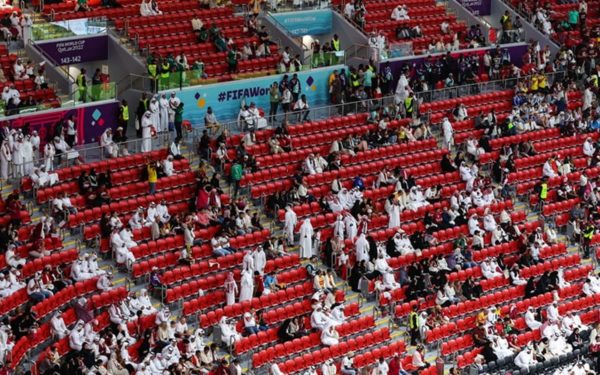 Curious. Since the start of the World Cup in Qatar, the organisers have been announcing attendance figures for the matches that are, to say the least, far-fetched and, above all, very contradictory to the capacity of the stadiums. For the first three matches – Qatar-Ecuador, England-Iran and Netherlands-Senegal – played between Sunday 20 and Monday 21 November, the attendance figures were announced at 67,372, 45,334 and 41,721 respectively, for stadiums with capacities of 60,000, 40,000 and 40,000. The discrepancy is all the more suspicious given that, for these first matches, the empty seats were often very numerous and visible. The trend was confirmed with the fourth match, between the USA and Wales. Played on Monday 21 November at the Ahmad bin Ali Stadium, which has a capacity of 40,000, the match was played in front of 43,418 spectators. When asked about this discrepancy in numbers, FIFA simply replied that the World Cup stadiums could increase their capacity by several thousand seats in “event” configuration. In general, the opposite is true, with the press box in particular taking up a large number of seats.