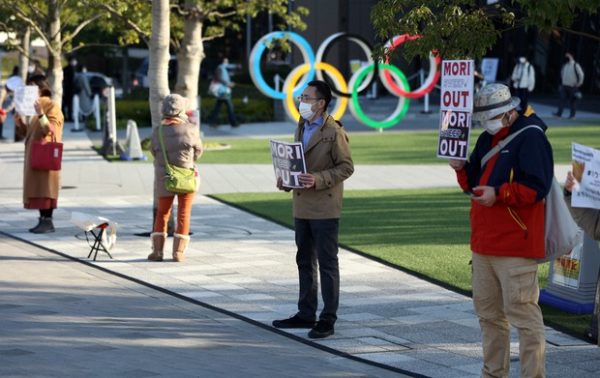 Yoshiro Mori will not resign as chairman of the Tokyo Games organising committee, but mobilisation is intensifying in Japan to get him to leave. More than 135 000 people had already signed, late Monday, February 8th, an online petition to protest the sexist remarks of the former prime minister. At the same time, a group of 25 Japanese women recorded a video, posted on social media, to express the point of view of women in the face of the very misogynistic statements of the boss of the Games. It has been viewed over 70 000 times. One of the instigators of the video says she wants this affair to be an opportunity for Japanese society to finally reflect on the issue of gender equality. In Tokyo, a dozen people gathered outside the premises of the organising committee on Monday, February 8th, to silently protest against Yoshiro Mori’s comments (pictured above). Protesters stood on the sidewalk for several hours, holding up signs calling for the resignation of the chairman of the organising committee.