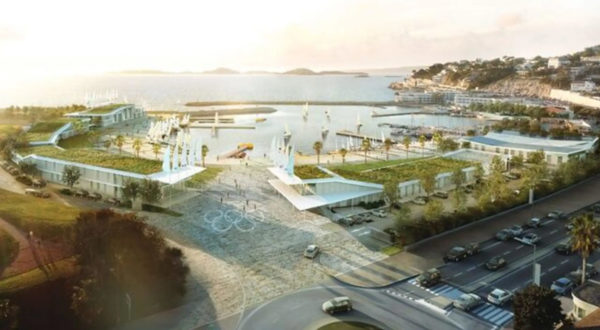 It is done. According to La Provence, the city of Marseille has chosen the architectural firms of Roland Carta and Jacques Rougerie to design the future Olympic marina of Roucas-Blanc, which will host the sailing events of the 2024 Paris Games. They will be associated with the group of Travaux du Midi (Vinci group). The project proposed by the two firms was preferred to those presented by Bouygues with the architect Jacques Ferrier, by Eiffage with the agency Chabanne architecture, and to that submitted by Léon Grosse associated with the German agency Auer et Weber and Panorama Architecture . The future marina will extend over 6 hectares (photo above). It will be designed “like a ring facing the sea and perfectly inserted into its environment”, between the Corniche and the Prado park. The project is intended to be discreet, with single-story buildings, to have the least possible impact on the neighbourhood. A specialist of the sea, the architect Jacques Rougerie notably imagined the Nausica National Sea Center in Boulogne-sur-Mer, and the Oceanarium in Kochi, India. There remains one question to be resolved: financing. The new Marseille municipal team recently announced its wish to halve its investment, originally planned to be 20 million euros. But the proposed new financing plan would largely involve the Region, an option little appreciated by its president, Renaud Muselier. Still according to La Provence, all the studies and works amount to 30 million euros for the land part and the marina buildings, plus 15 million euros for the maritime works.