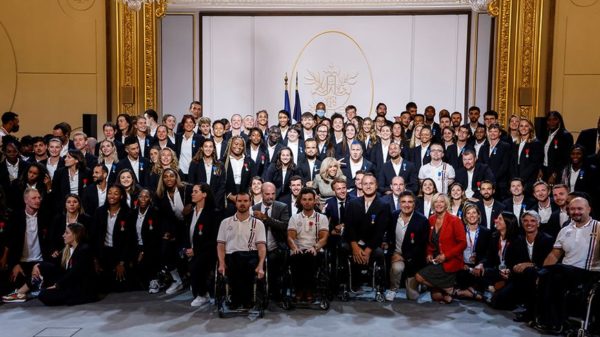 After the Olympic and Paralympic podiums, the French medallists at the Tokyo Games received the State’s honours. A few hundred crossed the Elysée Palace’s courtyard on Monday, September 13th, at the end of the afternoon, invited by the Head of State, Emmanuel Macron. It was a traditional ceremony, this year turned towards the next objective, the Paris 2024 Games. Emmanuel Macron made no secret of the fact that the results of the Olympic Games – 33 medals – are less brilliant than hoped (France won 42 medals at the Rio 2016 Games). The head of state was careful not to quote figures, but announced that France should reach the world’s top five in three years’ time at home, and then settle in this ranking for the following editions. “There are three years left before the Paris 2024 Games. We must at least not do as well. We have to do much better. The slogan ‘Higher, faster, stronger together’ must apply to our Games. France must be permanently integrated in the Olympic and Paralympic top five.” Emmanuel Macron promised that the state would not fail to support French athletes. He also recalled the current philosophy of “concentrating our efforts on disciplines with high potential”. In Tokyo, France took the 8th place in the medals’ table at the Olympic Games, and the 14th spot at the Paralympic Games.