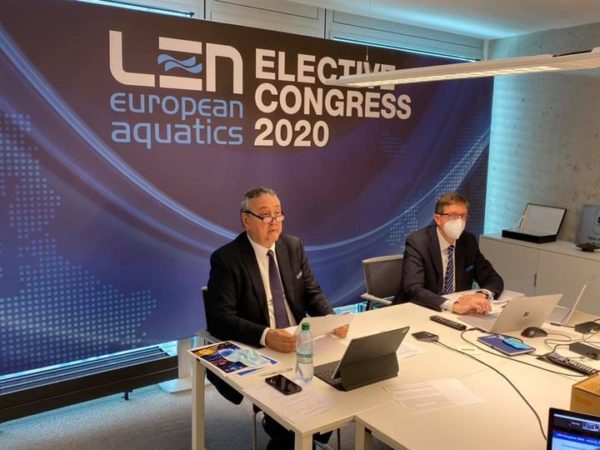 A storm is coming at European swimming. The continental body of the discipline, the LEN (European Swimming League), could be forced to organise early elections next February. They are being called for by 24 of the member national federations, which have come together in a group of opponents called “Europe for All” (E4A). The protesters, who are openly at war with the current governance of LEN, presented a petition at the recent LEN Congress in Budapest on Saturday, September 25th. Grouped behind António José Silva, the president of the Portuguese Swimming Federation, and Josip Varvodic, his Croatian counterpart, they criticise the LEN’s financial management, its lack of transparency, and insist on the loss of confidence in its leaders, including its president, the Italian Paolo Barelli (photo above, centre). At the last congress, the LEN’s financial report was approved by 47 votes in favour and 43 against, plus two abstentions. But a second vote of confidence in the Board produced the opposite result. Forty-six voters expressed their lack of confidence in the current governance, while 44 voted in favour of the current leadership team and two abstained. This is not the first time that the LEN has been in turmoil. Last March, Swiss police raided its offices in Nyon to seize documents following allegations of financial irregularities and embezzlement. But the investigation was unsuccessful. The Italian, Palo Barelli, has been regularly accused of corruption and has always denied the facts. Despite the accumulation of cases, he was re-elected in November 2020 for a new four-year term as LEN president, after beating his only rival, Frenchman Gilles Sezionale, with 86 votes in favour and 13 against. The extraordinary LEN Congress, if confirmed, would take place on February 5th, 2022, in Paris.