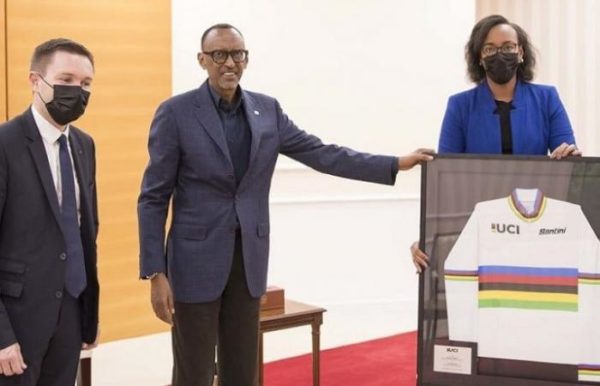 Like the election for the presidency of the International Cycling Union (UCI), the choice of the host country for the 2025 road World Championships was a foregone conclusion. On Friday, September 24th, the UCI chose Rwanda, rather than Morocco, to host an event that has long been promised to Africa. The global event will take place in the capital, Kigali. This is anything but a surprise. But the UCI’s decision to award Rwanda the first world championships on African soil opened up the debate on human rights even before it was made official. Early last week, Amnesty International referred to “reports of enforced disappearances, arbitrary detentions, excessive use of force, unfair trials and restrictions on the right to freedom of expression”. Coincidentally, the UCI Congress vote came in the same week that an opponent of President Paul Kagame’s regime (pictured above, centre, with David Lappartient), Paul Rusesabagina, who inspired the film Hotel Rwanda, was arrested on terrorism charges after a highly controversial arrest and trial. Interviewed by the British website Cyclingnews at the end of last week during the UCI congress in Leuven, Davis Lappartient did not shy away from the issue. “I have always said that the question of human rights was a major issue for the UCI,” explained the French leader. “But I was able to go to Rwanda, I met many Rwandans, and what I saw was a government that has gone through a very complicated crisis and has been able to unite people. When you look at where Rwanda came from and where it is today, I think that can only be done with real leadership. Sometimes we should not look at all the governments of the world through the prism of our strictly European way of seeing things. I really believe that there is strong support for the Rwandan authorities, for what they have done in terms of health and cohesion. Of course, every country can do better in terms of human rights. I think a lot has already been done. Sport has the virtue of bringing people together in common experiences and the road world championships will undoubtedly be a way to continue to reconcile the Rwandan people.” Hosting the World Cycling Championships in 2025 is expected to cost Rwanda €7 million to purchase the event licence, plus around €12 million in organisational costs.