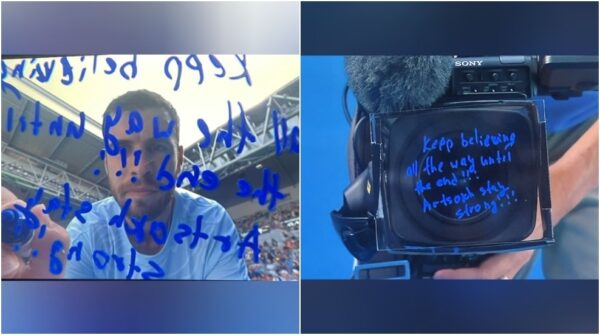 Controversy in Melbourne. The Russian player Karen Khachanov, still in the running in the men’s singles draw of the Australian Open (he faces the American Sebastian Korda this Tuesday 24 January in the quarter-finals), has caused a serious diplomatic incident with Azerbaijan. At issue were his successive messages of support for Nagorno-Karabakh, a region mainly populated by Armenians, which became independent from Azerbaijan in 1988. Since then, it has been the subject of frequent disputes between Yerevan and Baku. Last weekend, Karen Khachanov took advantage of the traditional post-match message written on a camera lens on the court after his victory over American Frances Tiafoe to express his support for the Armenian community in the region. “Artsakh, stay strong!!!” he wrote in felt pen. The Armenian-born Russian did it again after his win over Japan’s Yoshihito Nishioka. “Keep believing and fighting until the end. Artsakh remains strong,” he wrote. Not surprisingly, the Azerbaijan Tennis Federation did not remain without reaction. It explained on its website that it had sent an official letter of protest to the International Tennis Federation (ITF). “The letter provides facts and legal documents related to the attack on our country,” the national body explained. “The Azerbaijani Tennis Federation has asked for stricter measures to punish the player and avoid such incidents in the future. We hope that the issue will be resolved quickly and objectively“. Another statement issued over the weekend said that the President of the Azerbaijan Tennis Federation, Ogtay Asadov, had spoken to his Russian counterpart, Shamil Tarpischev (also an IOC member). “As the Azerbaijan Tennis Federation, we hope that these attacks will never happen again, and we expect Karen Khachanov to be punished for these actions,” the statement said.