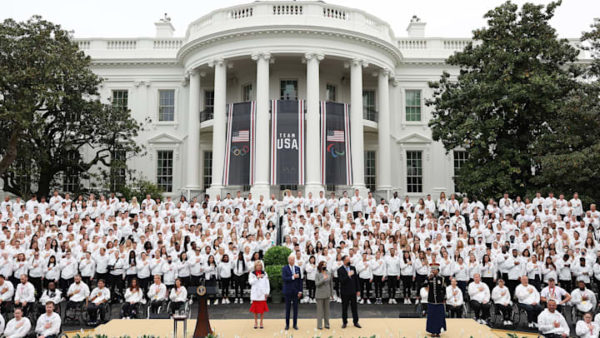 The event was expected to be massive. It did not disappoint anyone. For the first time, the American delegations of the Summer and Winter Games gathered at the White House for the same ceremony. On Wednesday 4 May, President Joe Biden received with great pomp no less than 600 members of Team USA from the last two editions of the Games, Tokyo 2020 and Beijing 2022. Traditionally, the Olympic and Paralympic teams come to the White House shortly after the Paralympic Games. But the rule has been overturned this year because of the postponement of the Tokyo Games and the fact that the two events are taking place in just a few months. “You have been through so much, suggested Joe Biden in a speech on the South Lawn. We have learned how great, diverse and talented this nation is. There is no quit in America. You are the epitome of that.” The US President told the audience that the two Olympic and Paralympic events had brought home more than 260 medals. “Thanks for letting me hold those medals, man, he said. It made me feel important for a second.” During the same ceremony, Joe Biden asked one of America’s Olympic sports figures, five-time bobsleigh medalist Elana Meyers Taylor, to address the athletes. “We’ve been through a lot, she said. A pandemic. A postponement. A war. But this team is resilient. We’ve pulled together, we’ve persevered, and we hope we’ve made this country proud.”