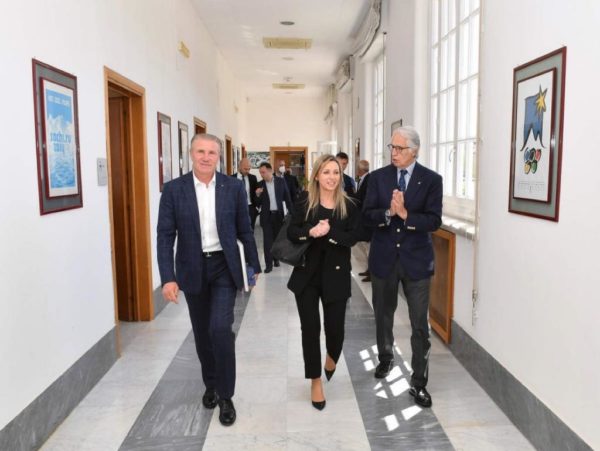 Sergey Bubka, who has been appointed by the IOC to supervise the fundraising campaign launched by the Olympic body to help Ukrainian athletes, visited Italy on Tuesday 19 April. Visiting Rome, the former pole vaulter met the President of the Italian Olympic Committee (CONI), Giovanni Malagò, as well as the Under-Secretary of State for Sport, former fencer Valentina Vezzali (photo above). On the agenda of the meeting was the ambitious aid programme set up by the Italian sports movement for Ukraine. Sergey Bubka explained on his Twitter account at the end of the meeting: 500 Ukrainian athletes have been welcomed in Italy since the beginning of the conflict. They will be able to train in the best conditions, as the Italian sports authorities have decided to cover their expenses, for an “indefinite period of time.” No less than twenty Italian sports federations have agreed to receive Ukrainian athletes. In Rome, Sergey Bubka was accompanied by the Ukrainian Minister of Youth and Sport, former fencer Vadym Huttsait, and the Ukrainian Ambassador to Italy, Yaroslav Melnyk.