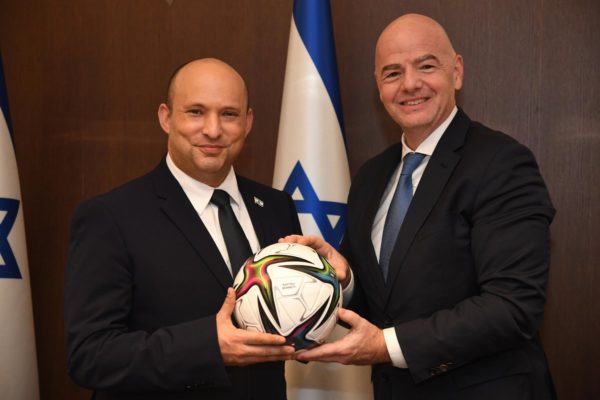 Gianni Infantino has never been afraid to mix sport and politics. Invited to Israel to speak at a conference organised by the Jerusalem Post, the FIFA president met with Israeli Prime Minister Naftali Bennett (photo above). So far, nothing very unexpected, as the world football boss has always appreciated exchanges with heads of state or government. But the content of the discussions was more surprising. According to a statement from the Prime Minister’s office, the two men discussed the possibility of Israel hosting the World Cup in 2030 with several other neighbouring countries, including the United Arab Emirates. Gianni Infantino “launched the idea that Israel could host the 2030 World Cup with other countries in the region led by the United Arab Emirates,” said the statement released on Wednesday, October 13th. Asked about the subject during the symposium, the FIFA president confirmed his statement. “I think that co-hosting is the future, so why not dream about it and think about it, whether it’s at senior or junior level, for men or women, because the FIFA World Cup has this unique magic of bringing people together and uniting them”. He also recalled, in a FIFA press release, that the Israeli Football Association had signed a historic agreement with the United Arab Emirates Football Association. The same statement emphasised the Italian-Swiss leader’s desire to “put football at the service of society, to make a real difference by contributing, where possible, to peace and stability in the region.” At this stage of the project, however, it seems difficult to imagine FIFA going beyond mere announcements and returning to the Gulf as early as 2030, just eight years after the 2022 World Cup whose climatic conditions forced world football to reshuffle its schedules.