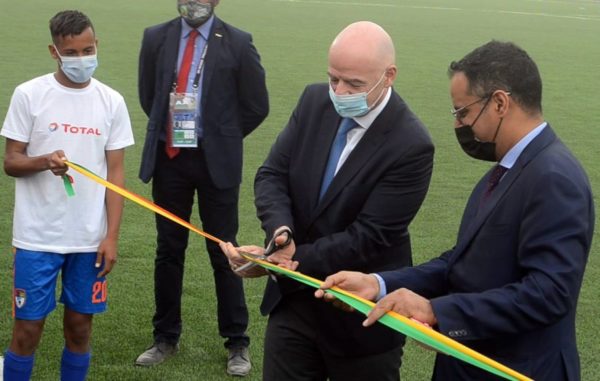 Unlike the vast majority of international sports leaders, Gianni Infantino continues to run the world despite the health crisis. The FIFA president is currently on a tour of Africa, with a first stage started on Tuesday February 16th in Mauritania. As soon as he arrived in the capital, Nouakchott, he went to the Cheikha Ould Boïdiya stadium (photo above), which was completely renovated thanks to funding from the FIFA Forward program. Gianni Infantino then met the Head of State, Cheikh El Ghazouani, to discuss in particular, according to the official press release, the good organisation of the U20 Africa Cup of Nations which is currently taking place in Mauritania, but also the development of women’s football in the country and the investments made to promote the discipline. The FIFA president continued his tour in Africa with a second stop in Senegal, where he was received Wednesday by President Macky Sall. However, his visit to Algeria, scheduled for February 21st and 22nd, was postponed. Also on the program, an interview with the President of the African Union (AU), the Congolese Félix Tshisekedi.