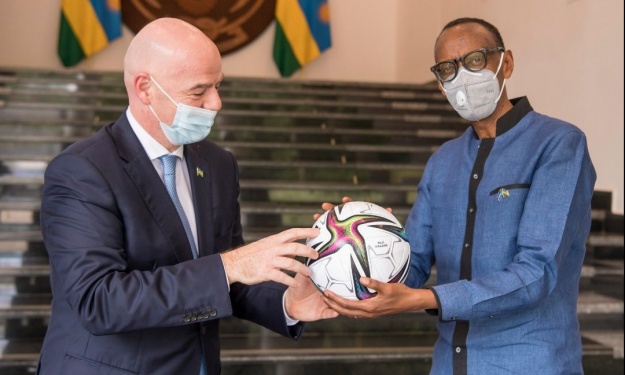 Gianni Infantino is continuing his intense tour of the African continent at full speed. After Mauritania, Senegal and the Central African Republic, the FIFA president has put down his luggage in Rwanda. On his agenda, the inevitable meeting with the head of state, Paul Kagame in the case of Rwanda (photo above). A “football fan“, according to Gianni Infantino, with whom the Italian-Swiss leader spoke of the “development of football in the country and in the region”. Above all, Gianni Infantino officially inaugurated a new FIFA development office in Kigali, the Rwandan capital. The mission of this office will be to implement the FIFA Forward program in the region, including the development of the practice, the organisation of competitions for boys and girls, the promotion of women’s football, while keeping an eye on FIFA’s investments in East Africa, to ensure they achieve their goals. In 2017, FIFA decided to establish development offices around the world to better serve its member associations. Four of these offices are already operational in Africa, notably in Dakar (Senegal) and Johannesburg (South Africa). The next on the list will soon be inaugurated in Brazzaville, Republic of Congo.