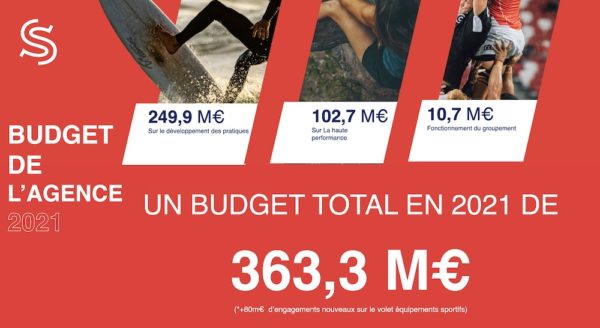 With less than four years before the Paris 2024 Games, French sport wants to give itself the means to achieve its ambitions. Meeting Monday, December 14 for the last time of the year, the board of directors of the National Sports Agency (ANS) validated its initial budget for the year 2021. It amounts to 363.3 million euros, an increase of more than 20% compared to the budget for fiscal year 2020, set at 299.9 million euros. The two largest parts of this budget will be devoted to “Development” (249.9 million against 200.6 million in 2020) and “High Performance” (102.7 million against 90.7 million in 2020). In addition, 10.7 million will be devoted to the operation of the group (8.6 million in 2020). The budget dedicated to the highest level exceeds the 100 million euros mark, as requested by Claude Onesta, the high performance manager. Clarification: the very spectacular increase in the budget for the year 2021 is also explained by the fact that the ANS has been entrusted by the government with the management of the first sport recovery plan, amounting to 120 million euros over 2 years.