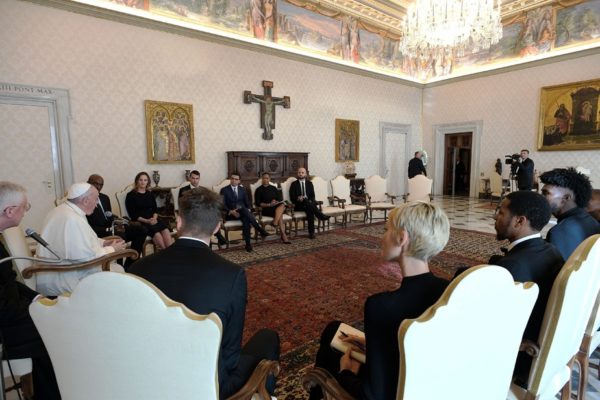 Unexpected. A delegation from the NBA was received Monday, November 23 by Pope Francis at the Vatican. The Pontifical Sovereign spoke in the library of the Apostolic Palace with five players from the North American League: Anthony Tolliver (Memphis Grizzlies), Jonathan Isaac and Marco Belinelli (San Antonio Spurs), Sterling Brown and Kyle Korver (Milwaukee Bucks) . At the heart of the discussions, racism and social discrimination in the United States. According to the Holy See’s news agency, Vatican News, the encounter was organised at the request of the players. “We are extremely honoured to have had the opportunity to come to the Vatican and share our experience with Pope Francis”, Kyle Korver said in a statement from the players’ association, NBPA. “A ‘dream team’ has crossed the ocean to say, with Pope Francis, ‘no to racism’”, suggested Vatican News after a meeting described as very “unusual between very different worlds”.