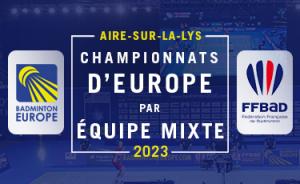 All signs point to the fact that France is set to host a record number of international sporting events over the next three years in the run-up to the Paris 2024 Games. The latest example is the European mixed team badminton championships in 2023. They have been awarded by Badminton Europe to the town of Aire-sur-la-Lys, in the Pas-de-Calais, about 240 km north of Paris. The event will take place from 14 to 18 February 2023. As a reminder, France had already hosted the European men’s and women’s team championships in Liévin in the north in 2020. Brian Agerback, Badminton Europe’s secretary general, commented: “It makes sense to organise a major event that will introduce the Paris 2024 Olympic Games. According to the Délégation interministérielle aux Grands Evénements Sportifs (DIGES), France is expected to host around thirty major continental or world events in 2022, and at least as many the following year.