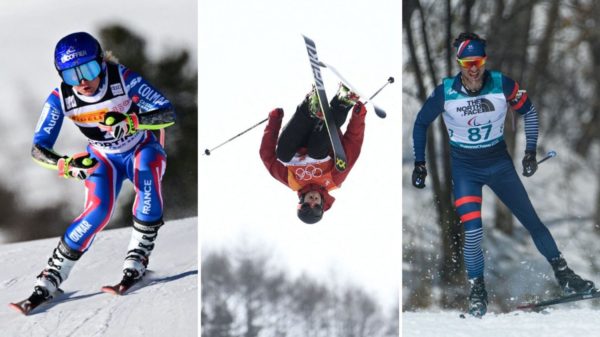 It’s done. France has chosen its flag bearers for the opening ceremony of the Beijing 2022 Winter Games. For the Olympic event, the French delegation will march behind a pair of skiers, Tessa Worley for alpine skiing and Kevin Rolland for freestyle skiing (photo above, left and centre). The two-time world champion in giant skiing (2013 and 2017) and the bronze medallist in halfpipe at the Sochi 2014 Games will succeed biathlete Martin Fourcade, flag bearer at the PyeongChang 2018 Games. For the Paralympic Games, the flag will be carried by biathlete and cross-country skier Benjamin Daviet, triple gold medallist four years earlier in PyeongChang (on the right in the photo). The French National Olympic and Sports Committee (CNOSF) had launched an unprecedented three-stage participatory process involving federations, the general public and athletes. For the first time, the general public was invited to vote to designate two ambassadors per discipline (one man and one woman), from a list of athletes proposed by the winter sports federations. These 26 ambassadors made up the college of grand electors. The general public was able to vote via the French team’s Facebook page. The online poll registered more than 65,000 votes. The 26 ambassadors designated by the general public then proceeded to the final vote (one woman and one man), among the declared candidates who had officially validated their selection for the Beijing 2022 Games. For the Beijing 2022 Paralympic Games, the flag bearer was chosen by the athletes on the Beijing 2022 wide list, on the sidelines of the Winter Para-Sport World Championships held earlier this year in Lillehammer, Norway.