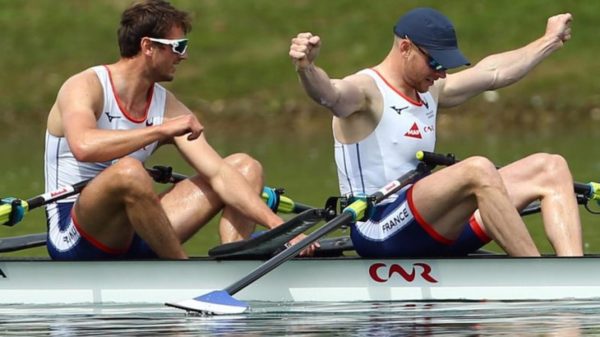 It’s award time for World Rowing. The world rowing body has unveiled the names of the winners of the World Rowing Awards for the year 2022. With less than two years to go before the Paris 2024 Games, France has won two trophies. The first was awarded to the double sculls of Matthieu Androdias and Hugo Boucheron (photo above). Olympic champions last year in Tokyo, they took part in only one international competition in 2022, the World Championships. They won it. Another trophy for French rowing: Denis Masseglia, the former president of the French National Olympic Committee (CNOSF), was honoured for his services to international rowing. A former rower and president of the French rowing federation between 1989 and 2001, Masseglia was a member of the World Rowing Council for four years until 2004. For the rest, World Rowing’s annual trophies were awarded to Ukrainian coach Vyacheslav Zagreba, the British Paralympic boat formed by Giedre Rakauskaite, Francesca Allen, Edward Fuller, Oliver Stanhope and Morgan Baynham-Williams, the Romanian women’s double sculls with Simona Radis and Ancuta Bodnar, and finally the New Zealand legend Mahé Drysdale, double Olympic champion in single sculls (2012 and 2016), who was awarded the Thomas Keller Medal.