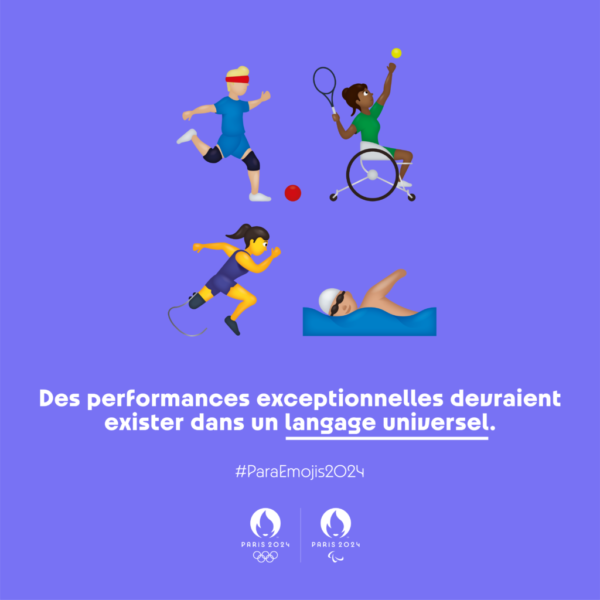 The Paris 2024 OCOG wants to innovate in the prospect of the Paralympic Games. It has announced that it has submitted the creation of specific Paralympic sports emojis to the Unicode Consortium, a private non-profit organisation made up of representatives from major technology companies, engineers, linguists and public representatives. To date, there are about 3,000 emojis, but the phenomenon has not yet reached the Paralympics. Paris organisers have already come up with four, representing para-swimming, five-a-side football, wheelchair tennis and para-athletics (photo above). The declared ambition is to increase the visibility and awareness of these sports, but also to allow people with disabilities to identify themselves. The OCOG’s initiative was supported by the International Paralympic Committee (IPC) and the French Paralympic Sports Committee (CPSF). It is also supported by several Paralympic athletes such as French athletes Marie-Amélie Le Fur (para athletics), Michael Jérémiasz (wheelchair tennis), Théo Curin (para swimming) and Yvan Wouandji (five-a-side football), Dutch athlete Marlou Van Rhijn (para athletics), Angelica Bernal from Colombia (para tennis), Husnah Kukundakwe from Uganda (para swimming) and Sylvio Velo from Argentina (five-a-side football), but also Olympians such as Alain Bernard (swimming), Gwladys Epangue (taekwondo) and Gévrise Emane (judo). A digital campaign, #ParaEmojis2024, has been launched on social networks. The Unicode Consortium, which is responsible for introducing new emojis, meets four times a year.