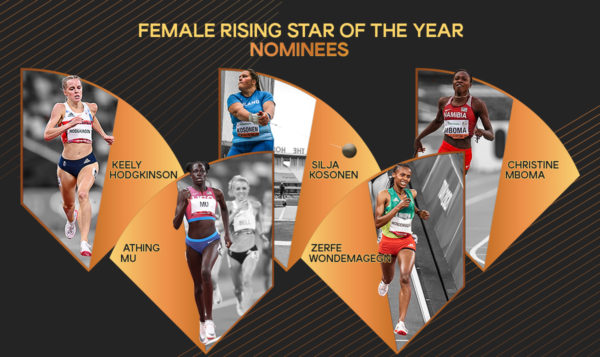 World Athletics continues to unveil its nominees for the 2021 World Athletics Awards. After the two most prestigious categories, Male and Female Athlete of the Year, the international body has revealed the names of the five nominees for the title of Female Revelation, which will reward the best athlete under 20 years old. The nominees come from five different countries and three different continents. The winner for the year 2021 will be chosen by a panel of international experts. She will be announced live at the World Athletics Awards ceremony, scheduled to take place online on December 21. The decision will be made between Britain’s Keely Hodgkinson, the Olympic 800m runner-up; Finland’s Silja Kosonen, the European and world U20 hammer champion; Namibia’s Christine Mboma, the Olympic runner-up and world junior champion in the 200m; USA’s Athing Mu, the Olympic champion in the 800m and 4x400m; and Ethiopia’s Zerfe Wondemagegn, the world junior runner-up in the 3,000m steeple. A very strong favorite stands out: the 19-year-old American Athing Mu, double gold medalist at the Tokyo 2020 Games.