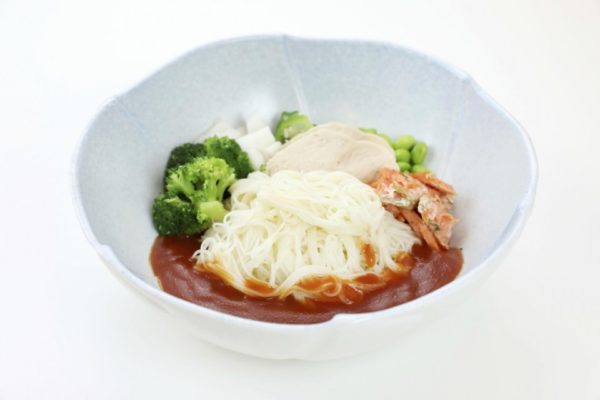 Unprecedented. The Tokyo Games Organising Committee revealed on Monday, April 19th: Japanese dishes to be served in July and August 2021 at the Athletes Village cafeteria have been the subject of a national cooking competition. Organised between last August and September, with the support of certain private partners of the Games, it gave rise to more than 700 proposals. Japanese organisers unveiled the five dishes that received the most votes. They will all be served at the Olympic Village. Topping the list is a traditional cold noodle dish “somen”, very popular during the summer months in Japan. But this Olympic recipe calls for adding chicken and vegetables to tomato broth (pictured above), to meet the nutritional needs of athletes. Another “winner”: a more wintery dish, Oden, but prepared for the occasion in a cold soup with tomatoes and other summer vegetables. For dessert, “panna cotta zunda”, a sweet green soy purée used in northeastern Japan, will be offered. Finally, the other two dishes selected are the fried “zangi” salmon, native to the main island of Hokkaido, and the toast with peaches, ham and cream cheese.