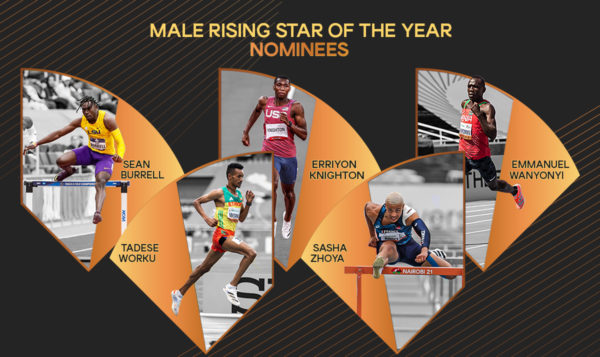 After the girls, it’s the boys’ turn. On Tuesday 9 November, World Athletics unveiled the list of the five nominees for the 2021 Male Newcomer of the Year award. It will be awarded on 1 December by the international athletics body at its traditional World Athletics Awards 2021, to be held in Monaco in virtual mode. Unlike the women’s category, where two-time US Olympic champion Athing Mu stands out, the list of nominees published by World Athletics does not include any medallists from the Tokyo Games. It is also slightly less universal than its female counterpart, with two Americans, two Africans and one European. Selected by an international panel of athletics experts, the title of Male Revelation of the Year will be decided between the Americans Sean Burrell, world junior record-holder in the 400m hurdles, and Erriyon Knighton, world junior record-holder in the 200m, 4th at the Tokyo Games; Kenya’s Emmanuel Wanyonyi, world junior 800m champion; Ethiopia’s Tadese Worku, world junior 3,000m champion and silver medallist in the 5,000m; and France’s Sasha Zhoya, world junior 110m hurdles champion and record holder.