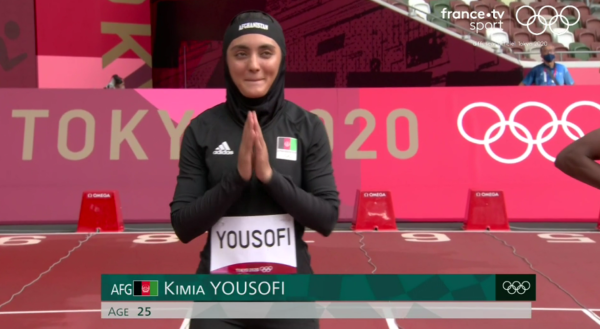 The Australian sports movement is mobilising to help Afghan athletes and officials. The Australian Olympic Committee (AOC) explained on Wednesday 17 August that it had succeeded in getting five Afghan families with links to the Olympic movement out of the country and into new homes. The project has been running for 12 months, since last August. A total of 31 family members have arrived in Australia, the first in early June, the most recent last week. These include two-time Olympic sprinter Kimia Yousofi (pictured above), Afghanistan’s flag bearer at the Tokyo 2020 Games, and Asian Games taekwondo specialist Ahmad Abasy, as well as two families from the volleyball community. According to a statement from the AOC, “all of the families were at significant risk if they had remained in Afghanistan because of their support for women’s participation in sport and education“. The AOC explains that it acted as an intermediary with the Australian Department of Home Affairs to obtain the visas, as well as the flights and transfers. Together with the IOC, the national Olympic body also provided financial support during the stay of the Afghan refugees in their various waiting places before reaching Australia.