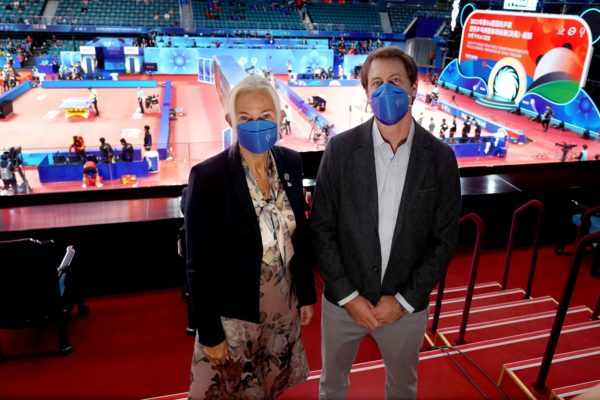 After the World Table Tennis Team Championships, which started on 30 September, the Chinese city of Chengdu will host the World University Games next year. In view of this multi-sport event, the International Table Tennis Federation (ITTF) has started a collaboration with the International University Sports Federation (FISU). Its head of summer competitions, Brian Carrer (pictured above with ITTF President Petra Sörling), travelled to Chengdu during the World Team Championships to “observe and learn from the organisation“. The table tennis event is the first international competition to be held in China since the Beijing Winter Games and the only one scheduled to take place in the country by the end of the year. It is being held in a “closed loop“, with delegations separated from the rest of the population at all times, having travelled to China on special flights chartered by the ITTF. The next World University Games were originally scheduled for 2021, but have been postponed twice due to the health crisis. They are scheduled to start on 28 July 2023 and will feature eighteen sports, including table tennis.