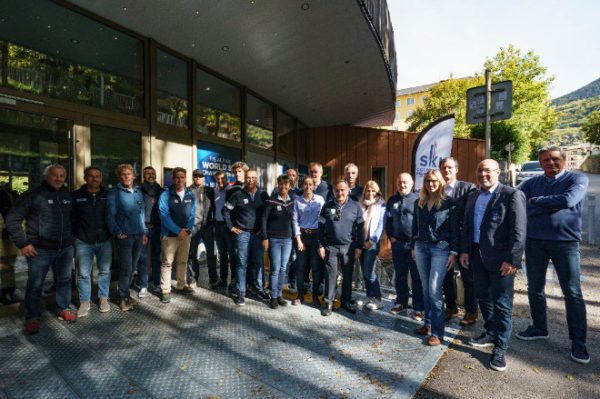 The final sprint has begun in Courchevel and Méribel, the two French resorts hosting the 2023 Alpine World Ski Championships (6 to 19 February). A delegation from the International Ski and Snowboard Federation (FIS) was in Haute-Savoie on 4 and 5 October for an inspection of the sites, the last one before the world event. The meeting was held equidistant from the competition venues, in Brides-les-Bains (Savoie), and was attended by Michel Vion, the FIS Secretary General, Sandra Spitz, the head of events at the international body, Markus Waldner and Peter Gerdol, the FIS men’s and women’s race directors. The programme included a presentation of the state of preparation of the World Championships in all areas of the organisation, including sport, infrastructure, TV production, accommodation, security, transport, marketing and communication. The FIS and Organising Committee teams also visited the bottom of the Roc de Fer slopes in Méribel and the Eclipse in Courchevel. With 120 days to go before the opening, “95% of the event has already been finalised, according to Michel Vion. There is still 5% to go. Together, we will be attentive to every detail.”