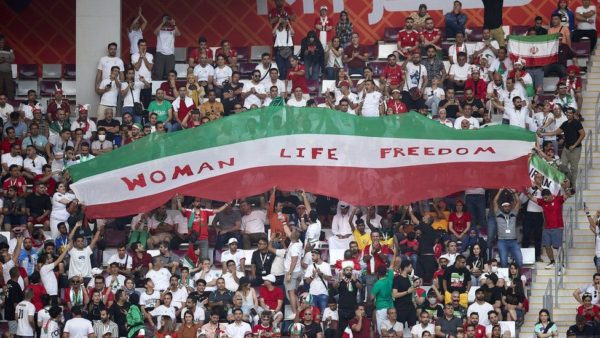 A step forward for FIFA. According to a document consulted by AFP, the international football body has decided to authorise certain signs in the stadiums of the 2022 World Cup in Qatar in support of the demonstrators in Iran. The list includes the slogan “Women, Life, Freedom” (pictured above), as well as portraits of the young Iranian woman Mahsa Amini, whose death last September sparked a massive protest movement. In a standard response to complaints filed on the World Cup 2022 organisers’ complaints platform, FIFA details the messages it allows in Qatar’s stadiums. “FIFA allows messages promoting human rights and FIFA’s position is that ‘Women, Life, Freedom’, or the name or portrait of Mahsa Amini, are allowed,” the document said. Conversely, in accordance with FIFA’s rules on prohibited objects for spectators, objects with political, insulting or discriminatory messages are prohibited. This also applies to flags of non-official countries, which can be considered as a political message. The Iranian team was defeated on Tuesday 29 November by the United States (1-0), and is now out of the World Cup before the second phase of the tournament. And with it, its contingent of supporters.