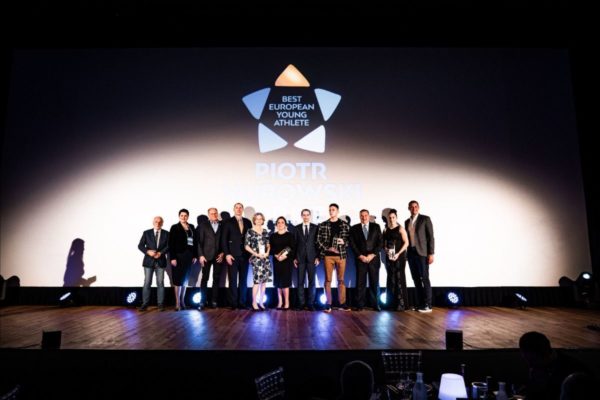 A great year for European sport. This was the conclusion of the first day of the 41st Seminar of the Association of European Olympic Committees (EOC), which is currently taking place in Samorin, Slovakia. EOC Sports Director Peter Brüll told the delegates that European athletes had achieved a historic collective performance at the Tokyo Games. No fewer than 40 of the continent’s 50 National Olympic Committees won at least one medal in Japan. In total, Europe won almost half (48.43%) of the medals at stake in Tokyo. On the first day of the Seminar, Olympic Solidarity Deputy Director Pamela Vipond said that 310 European athletes had received a scholarship in 2021. Of these, 70 won a medal at the Tokyo Games and 101 received a diploma. Finally, the EOC took advantage of this inaugural day to award its Piotr Nurowski prize to the best young European athlete of the year in a summer sport (photo above). The award was presented to 16-year-old Romanian swimmer Piotr Popovici. The youngest member of the Romanian delegation at the Tokyo Games, he placed 4th in the 200m and 7th in the 100m. Piotr Popovici received 37% of the votes from the EOC delegates, beating out Serbia’s Adriana Vilagos (athletics), Spain’s Adriana Cerezo Iglesias (taekwondo), Great Britain’s Sky Brown (skateboarding), and Russia’s Viktoria Listunova (gymnastics).