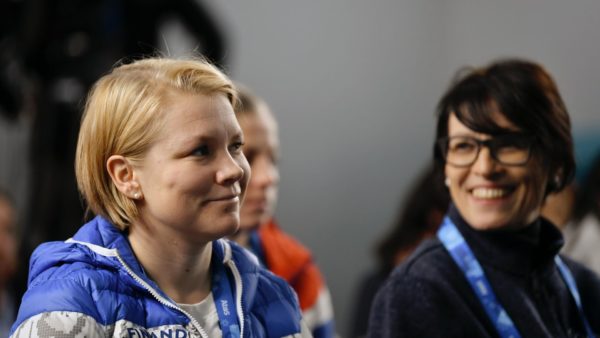 The chairmanship of the IOC Athletes’ Commission will remain in the hands of women. Finnish Emma Terho (pictured above), double Olympic bronze medallist in ice hockey, was elected on Friday, August 6th, in Tokyo, for the next seven years. She succeeds former swimmer Kirsty Coventry, whose term of office ends on Sunday, August 8th. A vote was held among the members of the commission to appoint a president and a vice-president. Emma Terho was preferred to the other candidate, former Russian pole vaulter Yelena Isinbayeva. The vice-president’s seat will be filled by a man, former South Korean table tennis player Ryu Seung-min. He will take over from Slovakia’s Danka Barteková. Emma Terho, 39, was elected to the Athletes’ Commission in the last election, held in February 2018 during the PyeongChang Winter Games. As a reminder, four athletes were elected this week, by their peers, to become IOC members for the next seven years: the Spanish basketball player Pau Gasol, the Italian swimmer Federica Pellegrini, the Japanese fencer Yuki Ota, and the Polish track cyclist Maja Martyna Włoszczowska. They will be sworn in during the closing ceremony of the Tokyo Games on Sunday, August 8th, replacing the four outgoing athletes: Kirsty Coventry, Danka Bartekova, Tony Estanguet and James Tomkins. A fifth member of the Athletes’ Commission will also hand over in his badge, former Swedish high jumper Stefan Holm. He was not elected, but appointed by Thomas Bach. To replace him, the IOC President chose a Kenyan rugby sevens player, Humphrey Kayange. Thomas Bach explained that this choice made it possible to maintain gender balance and to ensure the presence of Africa within the Commission after the departure of its only representative, Kirsty Coventry, of Zimbabwe.