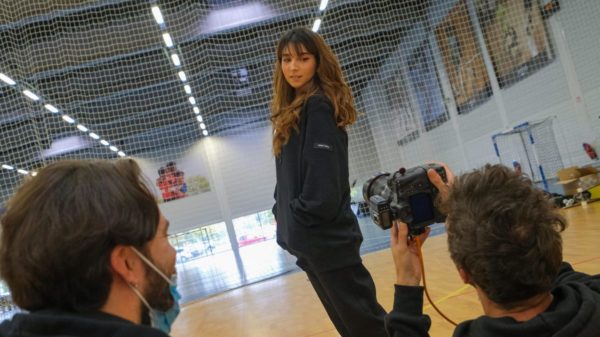 The Paris 2024 operation has begun for Decathlon. It is off to a gentle start. As an official partner of the organising committee, for which it will dress the 45,000 volunteers mobilised during the Games, the global sporting goods giant has announced the launch of its first collection dedicated to the Olympic and Paralympic event. This so-called “capsule” collection will be sold on a single day, on Saturday, October 30th, 2021, 1000 days before the opening of the 2024 Games. Only three pieces make up this first clothing line: a t-shirt, a hoodie and a parka. More surprising : Decathlon’ choice of the muse to promote the collection. The 25-year-old Japanese woman, Tijana Kawashima Stojkovic (photo above), made history at the Tokyo Games for helping Jamaican Hansle Parchment reach the Olympic stadium for his 110-metre hurdles semi-final. The young woman lent him money when he got on the wrong shuttle bus, so that he could take a taxi and get to the start of his race on time. Hansle Parchment went on to become an Olympic champion. Tijana Kawashima Stojkovic was officially thanked for her gesture by the IOC and the Japanese government. Seduced by her “state of mind”, Decathlon offered her an image contract to promote its collection dedicated to the Paris 2024 Games. Note: the three pieces sold on October 30th are made from recycled materials and manufactured by a social economy company.