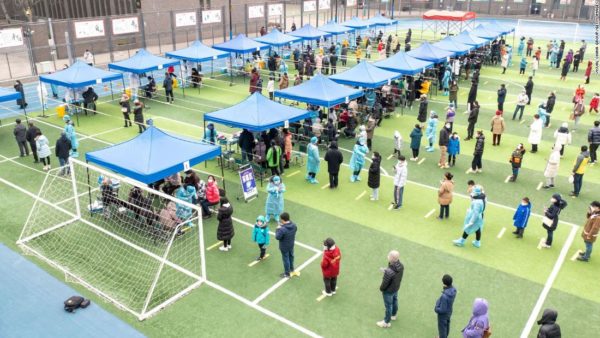 Worrying. Authorities in the Chinese city of Tianjin, just 120 km from Beijing, reported on Monday (10 January) that they had recorded 41 cases of COVID-19 in the past few days, after testing 3.4 million residents out of a population of 14 million. The large-scale testing operation began late last week after two cases of the Omicron variant were found at an after-school centre. Of the 41 people infected, 31 have symptoms of COVID-19. Only 10 are asymptomatic. In response to this “outbreak” of the pandemic, the Tianjin authorities have not yet decided on a full lockdown, but the affected neighbourhoods have been cordoned off, some underground stations closed, as well as the municipal zoo, museums and libraries. With less than four weeks to go before the opening of the Beijing Games, the health situation in the port city of Tianjin, known as a major industrial hub with Volkswagen and Airbus factories, is taken very seriously in China. Tianjin is located less than an hour by train from the Chinese capital. Many of its inhabitants make the daily journey to work or study. Above all, this surge in COVID-19 cases comes at a time when the first accredited foreigners are arriving in China. In a letter to the media sent on Monday 10 January, the IOC said that around 825 people had arrived in Beijing for the Winter Games since 4 January.