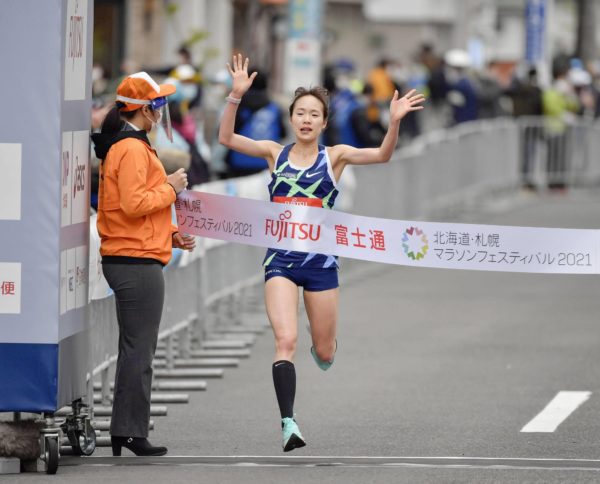 One more. The organizers of the Tokyo Games were able to tick another box from their pre-Olympic tests table, on Wednesday, May 5th. One of the most expected. The marathon test event could take place without major incident in Sapporo, the city designated by the IOC to host off-stadium events (marathon and racewalking). Reduced to a half-marathon open to less than a hundred runners, including six foreigners, it took place in difficult, cold and windy conditions. But Japan’s Mao Ichiyama (pictured above) took advantage of the circumstances to win the women’s race and set a personal best (1 hr 8 min 28 sec). Kenyan Hillary Kipkoech won the men’s race in 1 hour and 46 seconds. Sebastian Coe was in the first row of the few authorized spectators. The president of World Athletics kept repeating his confidence in holding the Games, despite a new wave of the pandemic, the state of emergency in Tokyo, the defiance of the public and the opposition from some Japanese prefectures’ governors. “I can understand the nervousness of the population regarding the Games and we take it very seriously, confided the British. We have COVID protocols that have been put in place and tested. I was able to see it this morning. We take the health and well-being of local communities very seriously. It’s very important that, as the world moves forward to emerge from the pandemic, it does so with optimism. The Olympic and Paralympic Games will be a symbol of that optimism and hope. It is important that they are held safely and well.” According to Yasuo Mori, an official from the organizing committee, there was no positive case revealed among the participants. The athletes were confined to their hotels, without contact with the population. The six foreign runners present at the start were tested on a daily basis.