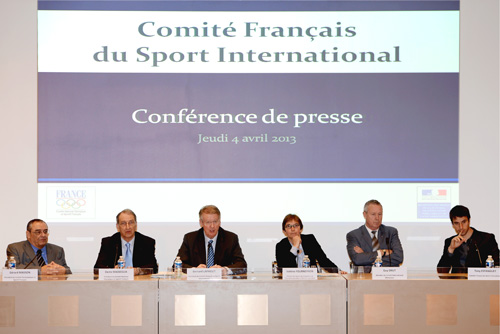 With less than three years to go before the event, the French sports movement is already looking ahead to the post-Paris 2024 period. The rebirth of the French Committee for International Sport (CFSI), which was presented at the end of last week during the track cycling World Championships in Roubaix, proves this. It had been created in 2013 (photo above) with the stated intention of preparing the ground for a Paris bid for the 2024 Games, through a stronger presence of the sports movement and its leaders on the international scene. It was then chaired by Bernard Lapasset, who was also co-chair with Tony Estanguet of the Paris 2024 bid committee. It was abandoned after the victory of the French capital in the race for the Games, and has now risen from its ashes. The new structure, presented by the Sports Minister Roxana Maracineanu, aims to “federate energies to gain influence and attractiveness on the international scene”. At this stage of the process, the new CFSI is only being written up. It will be formed in the coming weeks, with a strategic committee expected by the end of November. But the intention is clear, and the objectives already specified: to strengthen France’s influence in international sports bodies, its attractiveness for major events, and to help companies win new markets. Among the initiatives envisaged, the installation of an office in Lausanne, the Olympic capital, and the organisation of so-called influence meetings during the next major events on the international sports calendar in France. The new version of the CFSI will very quickly have its first mission: to support Martin Fourcade’s candidacy for the IOC Athletes’ Commission, whose elections will be held during the 2022 Winter Games in Beijing.