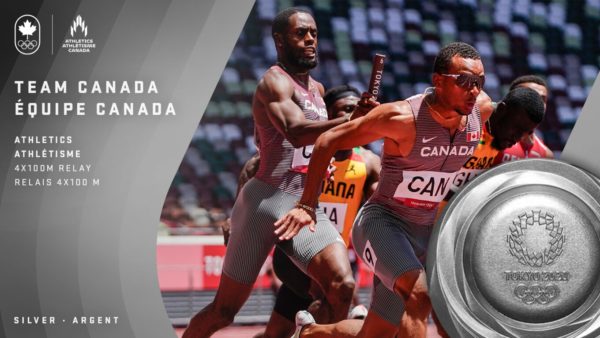 It’s official: Canada’s record at the Tokyo Games has changed by one. Meeting the day before, the IOC Executive Board announced on Thursday 19 May that the Canadian men’s 4 ×100m team, bronze medallists at the Tokyo 2020 Games, will receive the silver medal. The Canadians will inherit the place of Great Britain, which was second in the final but disqualified after one of its members, Chijindu Ujah, tested positive. The Canadian relay was made up of Jerome Blake, Aaron Brown, Andre De Grasse and Brendon Rodney. The four sprinters completed the lap in 37 seconds 70 seconds to take third place behind Italy and Great Britain. They finished ahead of China, who will eventually receive the bronze medal. Tokyo 2020 marked the second Olympic Games in which Canada won a medal in the 4 × 100 m relay. Brown, De Grasse and Rodney were members of the bronze medal-winning team in the same event at the Rio 2016 Games.