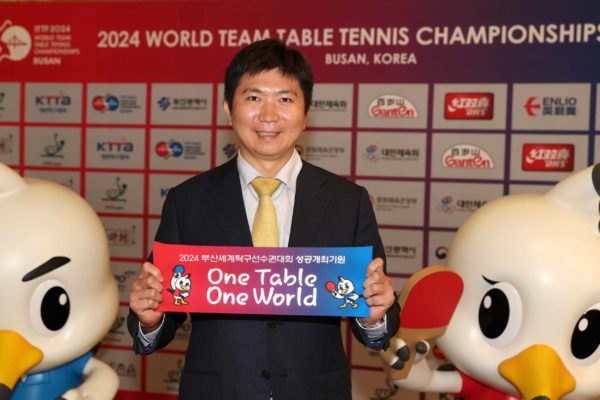 After China, South Korea. With less than a week to go before the opening of the World Table Tennis Team Championships, scheduled to start on 30 September in Chengdu, the international table tennis body (ITTF) has announced the dates of the next edition. The World Team Championships will be held in 2024 in Busan, South Korea. However, due to the Paris Games, they will be held much earlier in the season, from 16 to 25 February. The world event will serve as a qualifier for the Paris 2024 Games, with the eight teams that reach the quarter-finals earning their ticket to the Olympic tournament. In Busan, the organising committee will be co-chaired by former table tennis player Ryu Seung-min (pictured above), IOC member and President of the Korean Table Tennis Association, and Park Heong-joon, the city’s mayor. The competition will bring together forty teams, both men’s and women’s. Thirty-three of them will compete in the tournament. Thirty-three of them will qualify via a continental stage, while the other six will have to go through world qualifying. South Korea will automatically qualify as the host country.