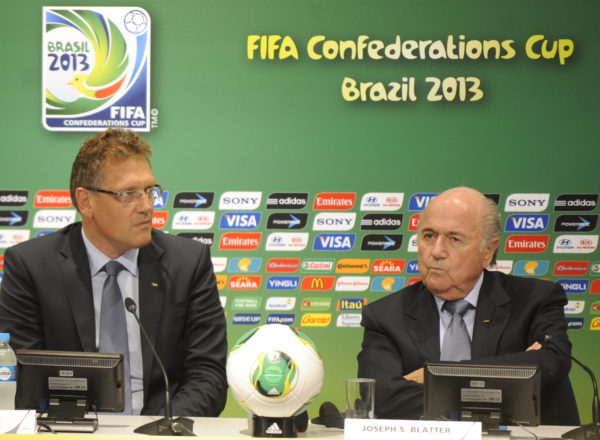 The soap opera continues, endless and without any real twist. FIFA announced on Wednesday, March 24th, that it had extended the suspensions of its former president, Sepp Blatter, and its former secretary general, Jérôme Valcke. The two men (pictured above) are seeing their penalties extended by six years and eight months, due to staggering bonuses they granted themselves during their time at the helm of world football. FIFA internal justice also sentenced them, both, to a fine of one million Swiss francs (905 000 euros). For Sepp Blatter, the sums concerned make you dizzy. The former FIFA president granted himself an extraordinary bonus of 23 million Swiss francs (20.7 million euros), linked to the 2010 World Cup in South Africa, the 2013 Confederations Cup and the 2014 World Cup in Brazil. Jérôme Valcke, for his part, drew even more appetite from the cash registers. He received 30 million Swiss francs (27 million euros) in bonuses for the same period, in addition to his salary as secretary general. According to the FIFA Ethics Commission, the transactions did not need any validation, except those of the former CFO, Markus Kattner, fired in May 2016 and suspended last year for a period of 10 years, and the ex-vice president of FIFA, Julio Grondona, who died in 2014. The four men could draw on the reserves of the body without fear of an outside look, since they mutually approved their respective bonuses. Between them, they shared nearly 70 million Swiss francs: 64.5 million between Sepp Blatter, Jérôme Valcke and Markus Kattner, plus $4.5 million for Julio Grondona.