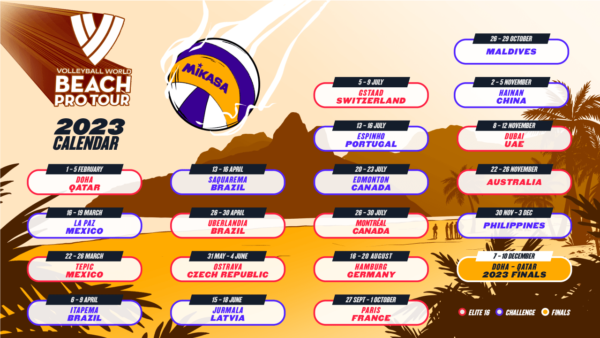 The International Volleyball Federation (FIVB) has unveiled the full calendar for the 2023 season of the Beach Pro Tour, its professional beach volleyball circuit launched last year. This second edition will begin on 1 February, with the first Elite16 tournament in Doha. It will end ten months later in the same Qatari city, for the tour finals scheduled for 7-10 December at Aspire Park. By then, the Beach Pro Tour will have made stops in South America, Europe, North America and Asia. The 2023 schedule will include new tournaments in Tepic, Mexico and Montreal, Canada. It also includes a return to some of the venues already on the programme for last year’s inaugural event, including the Roland Garros stadium in Paris (27 September to 1 October), Hamburg in Germany, and Dubai. The Beach Volleyball World Championships will take place in October in Mexico.