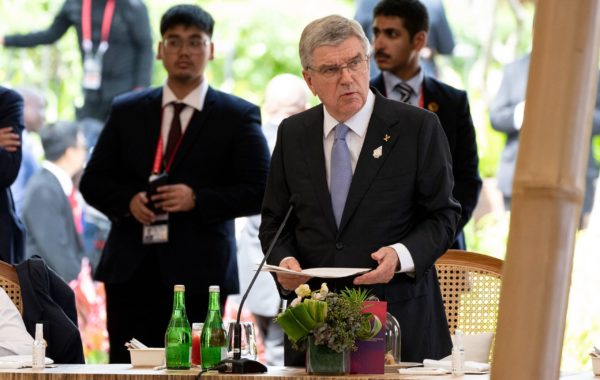 Unusual. Two IOC members, and not the least, were present on Tuesday 15 November at the 17th G20 Summit in Bali, Indonesia. Thomas Bach and Gianni Infantino both spoke to the heads of state and government. Unsurprisingly, they spoke about peace, against the backdrop of the conflict in Ukraine. “We have condemned and sanctioned the Russian government in an unprecedented way for this flagrant violation of the Olympic Charter,” explained the IOC President during his speech (photo above). “We stand with the athletes and members of the Ukrainian Olympic community around the world in solidarity. But unlike too many other wars and conflicts in our world, over this war, some governments have started to decide which athletes would be allowed to participate in international sports competitions – and which would not. If sport becomes – in this way – another tool to achieve political goals, international sport will collapse (…) A competition between athletes from only like-minded countries is not a credible symbol of peace. To live up to our unifying mission, the IOC must be politically neutral. To enable future Olympic hosts to welcome the world’s best athletes, regardless of political conflict, I call on you, the world’s leaders, to support this political neutrality.” Gianni Infantino also referred to the war in Ukraine. But the FIFA president, en route to Qatar, called on G20 members for a ceasefire during the 2022 World Cup. “Russia hosted the last World Cup in 2018, and Ukraine is bidding to host the World Cup in 2030,” said the Italian-Swiss leader. “Maybe the current World Cup, which starts in five days, can really be a positive trigger. So I ask you all to think about a temporary ceasefire, for one month, for the duration of the FIFA World Cup, or at least the establishment of humanitarian corridors, or anything that could lead to the resumption of dialogue as a first step towards peace. You are the leaders of the world, you have the ability to influence the course of history. Football and the FIFA World Cup offer you and the world a unique platform for unity and peace around the world. So let’s use this opportunity to do everything in our power to start ending all conflicts.”