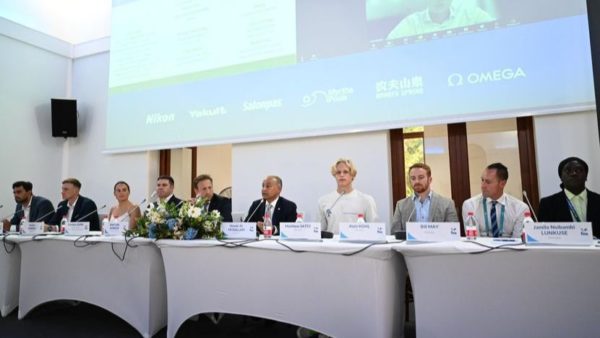 Big day for FINA. The world authority of swimming unveiled on Wednesday June 29, during the World Championships in Budapest, the composition of its Athletes’ Commission. The first one in its history. Its members were elected by their peers, for a four-year mandate (2022-2026), after a vote organized during the World Championships in the Hungarian capital. The commission is rather balanced in terms of gender and discipline, with representatives from racing, diving, high-flying, water polo, artistic swimming and open water. It has an equal number of men and women, and at least one member from each continent. The president of the commission will be Jamaica’s Alia Atkinson. The role of vice-president has been entrusted to the British Jack Laugher. Surprise: a Russian diver, Maria Polyakova, is among the athletes elected in Budapest, despite the exclusion of Russian swimmers decided by FINA in reaction to the invasion of Ukraine. For the rest, the athletes’ commission is composed of the following representatives: Nehal Saafan (Egypt) and Bill May (USA) for artistic swimming; Anna Bader (Germany) and Alain Kohl (Luxembourg) for high diving; Ana Marcela Cunha (Brazil) and Ferry Weertman (Netherlands) for open water; Therese Alshammar (Sweden), Shane Ryan (Ireland), Siobhan Bernadette Haughey (Hong Kong), Dmitriy Balandin (Kazakhstan), Jessica Hansen (Australia), Ryan Pini (Papua New Guinea), Jamila Nsibambi Lunkuse (Uganda), Matthew Sates (South Africa), Dylan Carter (Trinidad and Tobago) for swimming; Margarita Plevritou (Greece) and Felipe Perrone Rocha (Spain) for water polo.