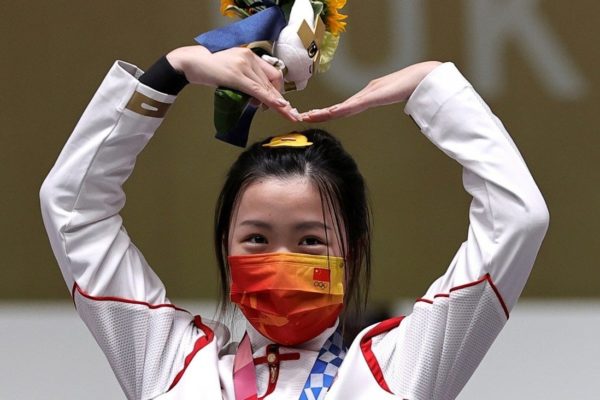 That was unexpected. The Xinhua news agency reports that the Chinese Olympic Committee (COC) has decided to protect its athletes against the illegal registration of their names as trademarks. Since the end of the Tokyo 2020 Games, this fraudulent practice has reportedly intensified in China. Among the main victims are several gold medallists, including young shooter Yang Qian (pictured above), table tennis player Chen Meng, and diver Quan Hongchan, only 14 years old. A COC report reveals that all three Olympic champions have had their names illegally registered as trademarks, in sectors as diverse as alcoholic beverages, sportswear and tutoring. Yang Qian, 21, who won the Tokyo Games in women’s 10m rifle and mixed event, is said to have been the subject of several trademark applications linked to her name. In the case of Quan Hongchan, winner of women’s 10m diving event, the number of unlawful applications reportedly reached 19. And that was in less than a week. “The rights and interests of athletes must be respected,” the Chinese Olympic Committee said in a statement. “Any registration of athletes’ names as trademarks without the permission of the athletes or their guardians is prohibited. Any violator must cease its action. Athletes or their guardians, if they are minors, have the right to take legal action against the perpetrators of such illegal registrations.”