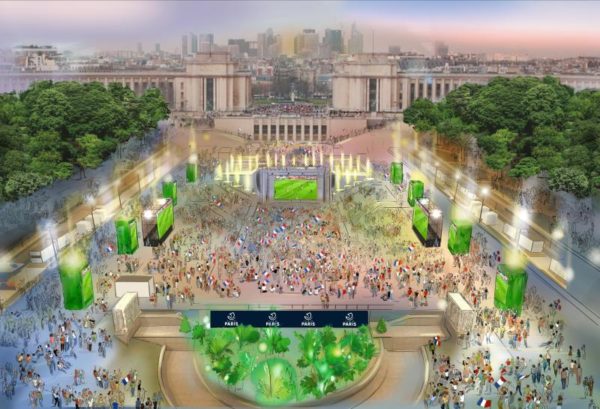 Three years before the deadline, the political consensus at the Paris City Hall around the 2024 Olympic Games seems to be about to shatter. The opposition formed by the elected representatives Les Républicains (LR), Modem and EELV (ecologists) blocked the project of an ephemeral stadium dedicated to the Games at the end of last week. It was planned on the Trocadero, in front of the Eiffel Tower, and had to welcome a broadcasting area for the Olympic and Paralympic events in Tokyo, but also demonstrations and sports initiations, from July 17th until September 13th. The European 3×3 basketball championship is also to be held on one of its fields, from September 10th to 12th. However, the elected representatives of the opposition rejected the decision that is supposed to establish the price list between the City of Paris and private partners. The latter were to contribute about half of the cost of installation and maintenance of the structure, estimated at 2.6 million euros.
According to ecologist Aminata Niakate, the project would have had the effect of condemning and eliminating “this beautiful, fresh space in the middle of summer” because of the cover-up of fountains and ponds. “These events will inevitably lead to severe degradation of the adjoining gardens.” End of story? Not sure. In a very offensive press release, the City of Paris declares itself “determined not to deprive Parisians, people from Ile-de-France, French and foreign tourists, of these popular, free sports events, organized with the Paris 2024 OCOG, the CNOSF, the Paralympic Committee, associations and sports clubs.” Failing to reach a consensus around a project that is supposed to contribute to the mobilization of the population around Paris 2024, the Paris City Council seems ready to force its way through. The following comment by Pierre Rabadan, Sports deputy for the Olympic and Paralympic Games, proves it: “It is with sadness that I note the gap between the political negotiations of the Parisian right and the ecologists and the expectations of the inhabitants. These political postures try to prevent popular sports activities organized by the sports world actors, which are particularly affected by the crisis. We are determined not to let ourselves be dragged down this path and to make this project a reality. The City of Paris is committed to ensure that Parisians and all those who come to the Trocadero this summer enjoy these free activities.”