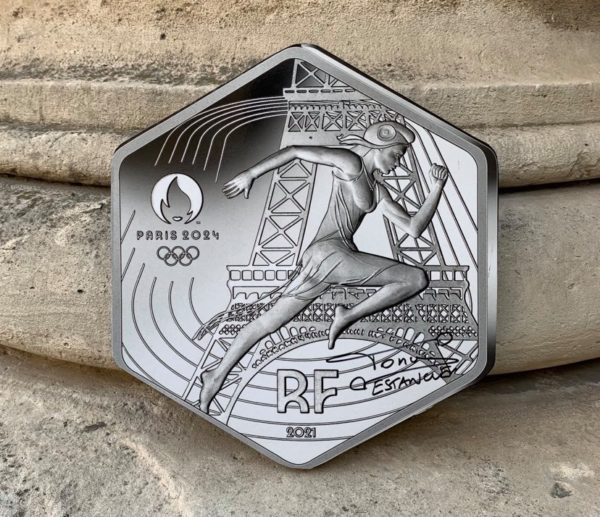 It’s done. On Tuesday, September 21st, the Paris 2024 OCOG presented a collection of new coins dedicated to the next summer Olympic and Paralympic Games, as tradition requires. The coin is minted by the Monnaie de Paris, as it was a hundred years ago for the Paris Games in 1924, or more recently for the Albertville Winter Games in 1992. A world first: a coin is hexagonal-shaped, a real technical challenge according to its designer, Joaquin Jimenez, general engraver and director of artistic creation at Monnaie de Paris. It is presented in two versions: a gold model with a face value of 250 euros, produced in 15,000 copies, and another in silver, with a face value of 10 euros, produced in 100,000 copies. They are sold for €260 and €14 respectively, in shops and on the Monnaie de Paris website. A commemorative €2 coin, with a more conventional shape, completes the collection. Like the two hexagonal versions, it is illustrated by a Marianne in the middle of a race, with an athletics track in the background and the Eiffel Tower. Finally, the Monnaie de Paris will also offer medallions with the Olympic (50,000 pieces) and Paralympic (15,000 pieces) emblems, sold for 9.50 euros. Tony Estanguet, President of the Organising Committee, commented: “Today is a very important step. This hexagonal coin, the first in this form, is very beautiful and very successful. It says many things. It speaks of sport, the Eiffel Tower, this athletics stadium, the Marianne of the Games… This collection also marks our desire to highlight French savoir-faire, while bringing sport and culture closer together”. The presentation of these collectibles marks the launch of the sale of official licensed products for Paris 2024. The catalogue will include around 10,000 product references, manufactured by some 60 licensed companies.