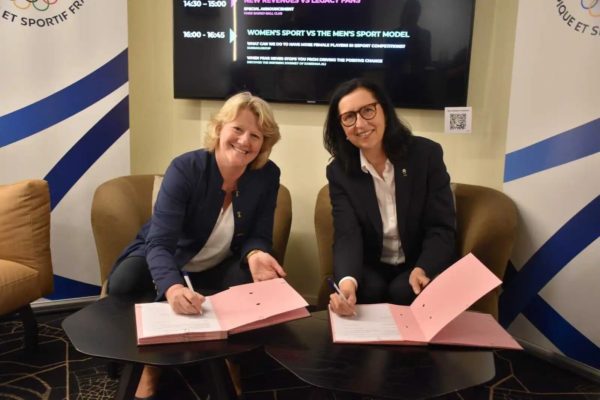 With just over 800 days to go until the Paris 2024 Games, the Canadians are stepping up their game. After appointing last week the Chef de Mission for the Summer Games in France – former athlete Bruny Surin – the Canadian Olympic Committee (COC) announced that it had signed a memorandum of understanding with the French National Olympic and Sports Committee (CNOSF). It was signed on Tuesday 10 May during the visit of a Canadian delegation to Paris on the occasion of Global Sports Week. The collaboration between the two countries focuses on the promotion of Olympic values and clean and ethical sport; the development of sport in both countries, notably through physical education, sport for all and high performance sport; the promotion of the French language within the international sport movement; and finally, the sharing of experience in the fields of communication, marketing, legal and institutional issues. The two bodies, which have in common that they are chaired by women (Brigitte Henriques for France, Tricia Smith for Canada), also wish to collaborate on the preparation of bids and the organisation of major international sporting events. The Canadian delegation present in France this week took advantage of their trip to visit the Paris 2024 Games venues and meet delegates from other National Olympic Committees participating in Global Sports Week.