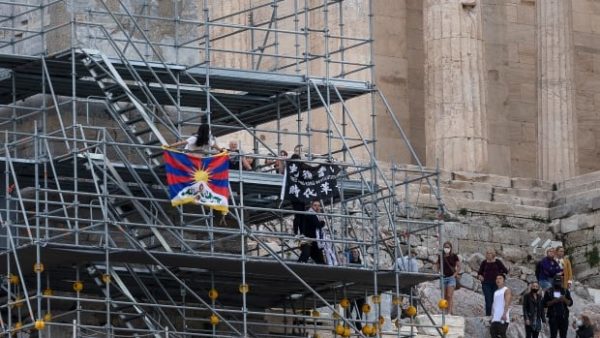 They said they would, and they did. Two Tibetan activists staged a protest against the Beijing 2022 Winter Games on Sunday, October 17th, at the Acropolis in Athens. Their takeover was short-lived, before Greek police intervened and they were arrested. But the demonstrators still had time to wave the Tibetan flag and the “Hong Kong revolution” flag atop the Acropolis. They also chanted slogans against the Beijing 2022 Winter Games (February 4th-20th), calling for a boycott of the event and the liberation of Tibet. The flags had been hung on the scaffolding of the Acropolis. They were quickly seized by Greek police. The two activists, Asian-American citizens, are members of the group “No Beijing 2022”. The Greek authorities are expecting another round of demonstrations, probably more massive, on Monday, October 18th, in the vicinity of the ancient stadium of Olympia, on the Peloponnese peninsula, where the flame of the next Winter Games will be lit in the morning. It will then be handed over to the Chinese the following day, to be flown to Beijing. The traditional torch relay between Olympia and Athens has been cancelled because of the sanitary crisis, thus significantly reducing the number of potential demonstrations against the Beijing regime.